A VISIT FROM SIR PATRICK STEWART

A VISIT FROM SIR PATRICK STEWART

If there is one actor who has made himself a household name for Baby Boomers and Millennials alike, showing up on our televisions and in the arts sections of the newspapers consistently for the last 60 years, it would be Sir Patrick Stewart. On Tuesday, July 17th, the Midsummer in Oxford Program was delighted to welcome the veteran of the stage for a wonderful talk and Q&A.

BADA Dean, Eunice Roberts, worked alongside Sir Patrick Stewart in the program Actors From the London Stage, which brings touring Shakespeare productions to the United States through the University of Notre Dame. Through this connection, Dean Roberts was able to organize Stewart’s visit to BADA.

Sir Patrick Stewart’s story and advice provoked a visceral reaction from both students and faculty. Stewart spoke on his childhood experiences: born in Yorkshire, England, Stewart grew up in an impoverished household with little access to education. Stewart found the stage unexpectedly, having never studied theater in his youth, but that he discovered a sense of comfort and boldness within himself that he had never experienced anywhere else. Upon immediate note of the young man’s talents, his Yorkshire accent and dialect was quickly sculpted into the crisp, received pronunciation we have come to recognise. Stewart provides a perfect example of the encouraging started from nothing but achieved greatness concept that so many of us ardently believe in.

Stewart spoke to the eager group of students, acknowledging that, although they may be younger and less experienced than he, they are artists no less than himself. He addressed the group, admitting that he believed the students understood more about acting technique and study than he did, while also reminding them that, while this may be true, there will always be more to learn.

Stewart, after answering questions on relationships with agents, accessing authentic emotions, and preparing for roles, then dropped in a few personal anecdotes for the audience to eat up. It is clear even to the untrained eye that Sir Patrick Stewart is a performer. He stood on stage with impeccable posture, his shoulders relaxed and his chest lifted upwards, and effortlessly articulated each word fully and reflectively. Every word, sentence, and he speech he delivered felt like a full story. And the best part? The students effortlessly matched him. The booming laughter from the crowd of growing actors and the confidence with which they expanded their voices into a vocal dome that reached Stewart even from the very back row. 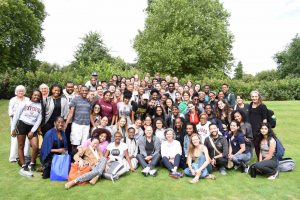