THE JUNGLE, AND Q&A WITH JOE MURPHY AND JOE ROBERTSON

THE JUNGLE, AND Q&A WITH JOE MURPHY AND JOE ROBERTSON

Our LTP students watched the thought-provoking show, The Jungle, earlier in the week at the Playhouse Theatre. The play is set in ‘the Jungle’, a refugee and migrant  camp in Calais, France. The camp was in use from January 2015 to October 2016,  as refugees and migrants attempted to gain entry to the United Kingdom via the port of Calais. In 2015, the population of the camp rapidly increased and French authorities began carrying out evictions.

The production explores the stories of the people who lived in this encampment, and the sense of community which developed there. The immersive set meant the audience were placed in the centre of the action, seated in the bustling Afghan Café which was at the heart of the camp. This was recreated inside the theatre space, as the performance unfolded and cups of sweet Chai were handed round. 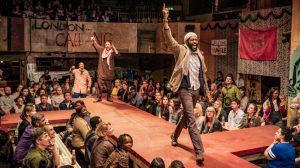 We were delighted to be joined later in the week by playwrights, Joe Murphy and Joe Robertson who wrote the play, based on their experiences working in Calais. Joe and Joe are Founders and Directors of Good Chance Theatre company. Good Chance built its first theatre space in the Jungle in 2015. It was conceived as a place for people to come to express themselves and offered a space to escape or confront the situations they were in. They lived in the camp in  for seven months, running the theatre space until the encampment was taken down.  The theatre then travelled to London’s Southbank for a nine-day festival of introductions led by refugees in July 2016. They won The Genesis Foundation Prize 2018, an award to recognise an outstanding mentor of young artistic talent whose work has effected real change.

Our students were able to have a lively Q&A session with them about their experiences working in Calais. There was a discussion on issues surrounding migration, the subject of diversity and representation in the arts, and what can be done in terms of helping. The playwrights also shared a video further showing the work that was done by the organisation in Calais, and added context to the play.