BADA is excited to introduce a series of three workshops

Complicité is an international touring theatre company, based in London. Founded in 1983 by Annabel Arden, Fiona Gordon, Marcello Magni and Simon McBurney, the Company is now led by Artistic Director Simon McBurney OBE.

The Company has toured over the world, won more than 50 awards and been described as ‘…the most influential and consistently interesting theatre company working in Britain.’ by The Times.

The roots of Complicite’s work can be found in building an ensemble through physical training and play, creating a shared visual language which will help shape and communicate the stories that the participants bring. By learning how to work as a team and move as a group, they work to create images, spaces, rhythms and atmospheres, that help move the stories forward. 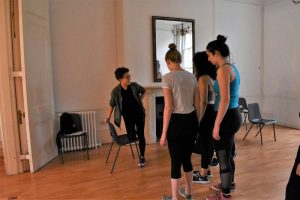 The workshops will focus on storytelling, looking at how to really grip an audience by finding that one crucial gesture, perfectly placed and perfectly timed, when telling a story. This involves the exploration of the rhythms of speech and the punctuation of gesture and paring these down to a minimum so that even the smallest turn of the hand is significant. It aims at enlarging participants’ vocabulary of movement, increasing suppleness and speed of action, being alert and sensitive but not tense, and paying attention to the range of possibilities in every simple movement, from a step to a nod.