Jennifer Steil has crammed more lives into her suitcase than most of us can dream of packing. She trained in theatre, worked as a journalist in Yemen, and spent four years writing a novel in Bolivia. Now living in London, she is a much-admired writer whose novels include The Woman Who Fell From The Sky and The Ambassador’s Wife, which was optioned to become a TV series starring Anne Hathaway. Jennifer signed up for the London Theatre Program at BADA as an undergraduate in 1989. Her new novel, [title to be confirmed soon], will be published by Viking in April 2020.

JS: I was a theatre major at Oberlin College and I 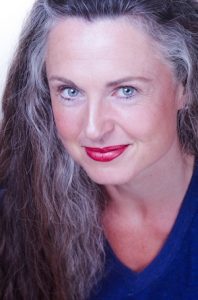 wanted to experience life in a different country while continuing to study what I love. The idea of studying nothing but theatre in London, a capital of the theatre world … sounded like an exciting opportunity, …given that I had high hopes of becoming a star of the stage and screen!

CC: Was there something about BADA that was particularly appealing? There were other programs at that time, though perhaps not as many as there are now.

CC: Who taught you?

JS: Bill Homewood taught me acting and he [has] stayed in my mind not only because he was an absolutely brilliant teacher, but also because he was an extraordinary director. He ended up directing me in Arthur Schnitzler’s La Ronde. It turns out that now, 30 years later or however long it’s been, he’s one of our neighbours in France, which is where our permanent home is. So, I still see him often and he’s still a great mentor, and now, more of a peer, in my life. As is his wife, RSC actress Estelle Kohler.

Another teacher I remember is Ben Benison. Ben was hilarious; he would always walk around singing “Ben Benison, Ben Benison, the actor to watch.” I still remember the tune. And he was great at Movement; he did fun things with bodies. I also learned a lot about how much could be found in every single page of text. With Bill and another teacher we rehearsed a lot of Shakespeare and a lot of Ben Jonson.

CC: Looking back what do you think it meant for you as a theatre major to be traveling abroad for the first time?

JS: I learned a lot of things that aren’t necessarily all connected to theatre. I learned how to live in a flat with five other people. Some of them are still close friends — I’m in touch with four of them. I formed extraordinarily strong friendships because it was a significant time in all of our lives and we were all at really tricky crossroads. The bonds I formed with my fellow actors were profound and remain important to me. It also gave me confidence to learn my way around London and the theatre world there.

I think I got a much deeper education in textual analysis and theatrical criticism than I had been getting in the US. I never had to think about anything other than theatre. It was the first time in my life that I had the luxury to only focus on what I loved doing whereas when I was in university I also studied science and French and other things. I also had the luxury of seeing four or five plays a week – what could be better than that! It was an incredible learning experience, seeing all the different kinds of theatre available at the time and all the different performances, and then talking about them with my flatmates because all we ever talked about was theatre for the most part, and that’s pretty exciting.

CC: When you left BADA, but more importantly when you graduated from Oberlin, had you every intention of being an actor?

JS: Yes, and I worked as an actor for many years. I think at the time I was still intimidated by New York, so I moved to Seattle and worked as an actor there for four years. But I got frustrated with the kinds of roles I was cast in. I was always either the ingénue or the prostitute with a heart of gold. It got very boring that I was never allowed to play anyone with a brain. I was frustrated with the roles that were available to women at the time and I think that’s still a problem in the theatre although it’s changing very slowly. Female playwrights also get produced so much less often than male playwrights in general. I have to mention that Stefanie Zadravec, one of my flatmates in London during my time at BADA, has become a brilliant and accomplished playwright. She is doing very exciting things. Michelle Cohen, another flatmate, is also doing incredible work as a producer, singer, and writer. They still inspire me.

the characters I played weren’t saying anything interesting and there were all these things I wanted to say to the world. So, I began writing. I realised I hadn’t actually taken any creative writing courses so I took a few and then applied to grad school thinking, well I can be in grad school and perform at the same time.
When I finished up my MFA I thought ‘Gosh, I have a BA in Theatre and a MFA in Creative Writing — I’m going to be waitressing for the rest of my life’. Not that there’s anything wrong with that. So I went and got an MS degree in Journalism from Columbia because I thought ‘Journalists get regular pay checks,’ which I’d never had.

When I was finished at Columbia and got a job in newspapers I realised very quickly that you can’t be a journalist in newspapers with daily deadlines and also commit to a rehearsal schedule. So I was in newspapers for only a couple of years and then I couldn’t stand being without theatre any more so I went back to performing. In order to do that I took a job with a magazine, basically writing soft porn for Playgirl magazine.  I took the job because I could leave the office at five every day and go to work with this downtown lesbian theatre company.

Actually it was the rehearsals I missed more than the performing. It’s that process of discovering and working with a group of people, collaborative work that you don’t get as a novelist until you’re working with an editor. And I worked in New York in small theatres until I moved to Yemen in 2006.

CC: How did that come about? That’s a really extraordinary move, from New York City to Yemen!

JS: Yes. I was writing for a different magazine by then. I was working for The Week, writing news. Again, I was dissatisfied because I couldn’t do any creative writing because by the time I got home I was just tired from sitting and writing all day and again there was only certain kind of theatre I could rehearse for in the evening.

Then my high school sweetheart wrote to me and said, ‘Would you come to Yemen and train the journalists here? They don’t know what they’re doing.’ I knew nothing about Yemen at the time; I’d never been to the Middle East. “I have a job”, I said.  ‘I have an apartment in Manhattan. I’ve got stuff, I can’t just run off to Yemen, but I’ve got three weeks holiday left, so I could come for three weeks and do a training course. Would that be useful?’ So he said ‘Sure’, and, I flew to Yemen and taught a training course to the staff of the Yemen Observer Newspaper, which my ex-boyfriend had done a little bit of writing for and I fell in love with my reporters. They were ambitious, eager, hospitable, warm, and they were just desperate to learn things.  I thought ‘God, “I never see anyone that desperate to learn things in the US.”

However, three weeks wasn’t enough. These reporters had no training at all as journalists, so I had to start from the very beginning. But there’s only so much you can achieve in three weeks. I was just beginning to help them think about what journalism really is and how to approach a story and what objective journalism is …. They’d never heard of journalism that told both sides of a story, trying to find balance, These were foreign concepts.  So after three weeks the owner of the newspaper who was Yemeni asked if I would stay on as editor-in-chief for a year and I said ‘Well…I don’t know… what are you going to pay me?’ and he said ‘I’ll pay you $12,000 a year’ and I said ‘I made more than that in New York’, and he said ‘Yes, but you don’t need more than that here.’ Which was true. It’s not a materialistic society, which was a relief in some ways but it’s partly a result of the dire poverty of the country.

CC: Had you started writing fiction while you were there?

JS: No, I’d been writing fiction for years privately. I’d been granted a residency in Costa Rica and actually written a novel, but it was a typical first novel in that although parts of it were well written, I didn’t quite have a feel for narrative structure. I’ve used parts of it in other things.

CC: Do you feel there’s a link between writing novels like The Woman Who Fell From The Sky or The Ambassadors Wife and your training in theatre?

JS: There are many links, not least in the development of character. A lot of the things that you think about when you’re developing a character that you’re going to perform and you come up with certain bits of back story that aren’t in the play but things that you know about them, their physical quirks, how’d they’d react in any situation means you have to have that same inside-out knowledge of character as when you’re writing a novel. It’s the same with motivation. In theatre you need to know ‘what’s their motivation in this scene’ and you have to do that as a writer as well … I have a new book coming out next year, and I’m writing a fourth book at the moment for my PhD. So far it is mostly dialogue and the more I write, the more I’m convinced that dialogue is actually what I do best and that might come from spending a large part of my life in the theatre, which is of course all dialogue. The book is probably going to come out April 2020 but we don’t have a name for it … It’s a novel about Jewish refugees in Bolivia, Austrian musicians in who are refugees in Bolivia in 1939.

CC: Do you think your feel for dialogue came out of the time that you studied English theatre here in London?