To mark Black History Month in the US this year, we asked Oladipo Agboluaje, playwright and Black British Theatre Course Director, about Black Theatre and the connections between the American and British stages. 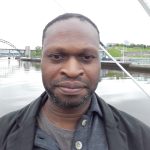 To say that British theatre has a love affair with American drama is merely stating a fact when one looks at the preponderance of revivals and new works that are a regular feature of the British theatre programme. From the modern classics of Eugene O’Neill, Tennesee Williams, Arthur Miller, Lorraine Hansbury and Alice Childress, to the works of contemporary playwrights like Dael Orlandersmith, Suzan-Lori Parks, Lynn Nottage, Tarell Alvin McCraney (MIO ’05), Annie Baker, Marcus Gardley, Branden Jacob-Jenkins, Aleshea Harris, Jackie Sibblies Drury, Dominique Morisseau, Antoinette Nwandu and (soon) Jeremy O. Harris, there is no sign of abatement in the interest of British audiences for plays that dramatise the American experience. And a healthy amount of these writers are African American.

The British revivals are, of course, mostly performed by all-British casts, which raises interesting questions about the dramaturgical interpretation of these shows. Although the majority of them are produced in the subsidised sector in venues such as The National Theatre, The Kiln, The Young Vic and Theatre Royal Stratford East, many, especially the classics, have gone on to critical and commercial success in the West End, London’s equivalent of Broadway. One such example is the all-black Broadway production of Cat On a Hot Tin Roof, starring James Earl Jones and Phylicia Rashad which transferred to London’s Novello Theatre in 2009. There is also the 2019 Young Vic production of Death of a Salesman, which cast the Loman family as black, with Wendell Pierce of The Wire fame starring as Willy Loman.* This version had a successful West End run at the Piccadilly Theatre.

The late August Wilson (1945-2005) is a writer whose works have regularly graced the stages of major London theatres. The Pulitzer Prize-winning Fences, part of Wilson’s Pittsburgh Cycle of plays, starred British comedian and actor Lennie Henry as Troy Maxson, a role made famous by the aforementioned James Earl Jones and played at the Duchess Theatre in 2013 to rave reviews. Michael Billington of The Guardian said the play reminded him of the ‘emotional candour that is the hallmark of American theatre’. The Independent’s Paul Taylor called the revival ‘beautifully judged and bruisingly powerful.’

Jitney and Ma Rainey’s Black Bottom were staged at the National Theatre in 2001 and 2016 respectively. Of Jitney, the British Theatre Guide’s Philip Fisher wrote that Wilson, ‘creates an excellent drama in which all life seems to be represented.’ This revival was by an all-American touring company that included Barry Shabaka Henley and Roger Robinson. Not all reviewers were as enthusiastic about the play as Fisher – Rhoda Koenig of The Independent called it ‘desultory’ and ‘with little of interest to say’, but there was no doubt it made an impression on many black theatregoers who witnessed as I did a play by a black writer in one of London’s biggest venues. Jitney would go on to win the prestigious Olivier Award for Best New Play for that year. Jitney was revived last year at the Leeds Playhouse and is going on tour this year, coming to London’s Old Vic Theatre in the summer.

If Jitney had mixed reviews, the 2016 revival of Ma Rainey’s Black Bottom met with nearly unanimous critical acclaim. This was the play’s second National Theatre outing, the first being in 1989. The earlier production played in the smaller Cottesloe (now Dorfman). This time the production was in the much larger Lyttleton. Dominic Cavendish of the Telegraph gave the play five stars out of five, calling the production ‘an evening of ensemble pleasure’. Billington called it a play of ‘passion and power’. Mark Shenton’s London Theatre review described the production as ‘both gripping and chastening’.

Mention must be made of the Kiln Theatre (formerly known as The Tricycle), which has staged several of Wilson’s London transfers including, The Piano Lesson, Gem of the Ocean, Radio Golf and King Hedley. Most of these plays were directed by Paulette Randall and featured major British acting talent such as Carmen Munroe, Joseph Marcell, Kobna Holdbrook-Smith, Jenny Jules and Lucian Msamati. Gem was part of the Kiln/Tricycle’s seminal African American season of plays which included London premieres of Lynn Nottage’s Fabulation and Abram Hill’s Walk Hard. At the time the then artistic director Nicolas Kent stated that he wanted to ‘track the African-American experience for the past 100 years’.

To end on a personal note, I’ve seen many of the plays that I’ve listed. They have provoked thought amongst myself and my Black British theatre contemporaries about narratives of identity, representation and notions of diaspora. They have made us engage with the differences and similarities of blackness in Britain and in the US, and this is one engagement that shows no sign of stopping any time soon.

Oladipo Agboluaje is the Course Director for BADA’s Black British Theatre course and the author of several plays including, Early Morning, The Christ of Coldharbour Lane, The Estate, Iyale – The First Wife, New Nigerians, Immune, The Hounding of David Oluwale and Here’s What She Said To Me. Awards include the Alfred Fagon Award, The Pearson Award, the Peggy Ramsey Award and an International Research Centre Fellowship, Berlin. He is a fellow of the Royal Literary Fund and Treasurer of the African Theatre Association (AfTA). Oladipo has been writer in residence at The New Wolsey Theatre Ipswich and the National Theatre. He is a member of The Fence, an international group of directors, dramaturgs and playwrights. Oladipo has taught African Theatre, Post-Colonial Theatre, Black British Playwriting and Creative Writing at Goldsmiths University of London, City University and University of Greenwich.