Eunice Roberts, Joint Dean of BADA talks to BADA’s newest Shakespeare Teacher, Paul O’Mahony about his career so far, the Advanced Shakespeare class he’s teaching at BADA and the key to devising your own production.

Eunice Roberts: Hi Paul.  We’re delighted to have you teaching Shakespeare for the Advanced London Theatre Program this semester.  In the past, it’s been an eight week course and then the students have gone on to do the productions mixed in together with the new semester long students.  However, this year, we’re having your good self, leading the class for the eight weeks and then guiding them into their own production Inspired by Shakespeare.

You regularly create your own productions with your theatre company Out of Chaos.  Could you just tell us a little bit about that work, such as Unmythable? 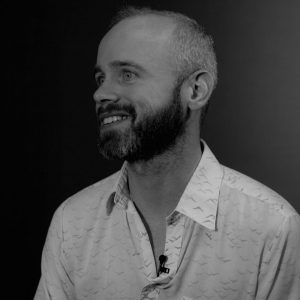 Paul O’Mahony: Absolutely! Our very first show was called Out of Chaos, which we toured to various festivals around Europe.  We have another show called Norsesome, which is a retelling of Viking legend and then a production which tells all the Greek Myths in one hour, called Unmythable. Unmythable has toured to around one hundred different theatres in the UK, around Europe and we’ve also been to New Zealand and Edinburgh where we won the Three Weeks Editor’s Award in 2012.  Our approach to theatre is based on creating a strong ensemble and lots of game playing: in each scene you’re really trying to find the game that is going on and that makes each scene lively and engaging.

That’s really what I want to spend a lot of these eight weeks doing with the students: exploring Shakespeare, exploring the text and being really rigorous with that and at the same time creating an ensemble that will be ready to go when they come back from their mid-term break.  I hope to help them create a strong ensemble that is sensitive to each other’s needs, and can work collaboratively both leading and listening as required, that can then generate its own work.  Having explored different plays, we discover that there are huge themes which are enduringly relevant and I’m interested to find out what the students find most interesting and most engaging.  Whatever they think is most important for them and for the world that they live in will then inform what we do for the production.  Whatever themes or situations excite them, there will be a Shakespeare play that will serve as a wonderful inspiration.

ER: We first met through Actors From The London Stage, a theatre company of five actors, no director, no stage manager, no one except support from an office and a plan of where the show will tour within American colleges and universities.  With only five people it means that in doing a whole play you always portray many characters and so there’s also that aspect to consider when devising your own piece.  Can you tell us a little bit about how you will begin devising this new piece of work with the students?

PO’M: Throughout the eight weeks we’ll gradually be doing bits of devising as well as exploring the text and then for the production period we’re going to be using a Shakespeare play as the inspiration for a whole new play, possibly having a play within a play, like in Hamlet or A Midsummer Night’s Dream.
Some of the devising we’ll be doing as a group will be inspired by the work that I do with Actors From The London Stage, for example, this last week we have been exploring Richard III and I’ve asked them to choose three different characters, ensuring that there is one of each gender and different age ranges between them, etc. and then this week we’ll be exploring switching between these different characters and playing scenes and trying to solve the problems that occur when there aren’t enough of them for all the parts.
 ​
ER: So in their production there will be lots of physical changing, but what about use of language?  Could you tell us a little bit about your thoughts on Shakespeare’s language, how it should be used?

PO’M: There are clues within the text and in choosing three characters they will begin to really find how many different clues there are.  I’ve also been asking them to choose lines that jump out as saying something particular about one of their characters.  They then begin exploring why that line is interesting.   What it is within that language, the structure, the vocabulary used that make it interesting, and how we can then use that to inform the character in terms of vocal quality?  This is very useful when playing multiple roles.  We also use it to inform the characters’ physicality, to start creating a silhouette…

ER: That is something I often talk about with new actors joining the company.  I ask them to imagine drawing a heavy pencil line all the way around the character’s body and then when you step out of that you leave an impression of that character behind on the stage, so in stepping in and out of characters they don’t disappear, their silhouette remains.

PO’M: Over the weekend I’ve asked them to look at parts of the Richard and Anne Scene from early on in Richard III, and what we’ll be exploring with that is the dynamic of a scene and how Richard and Anne are picking up on each other’s language.  Last week we looked briefly at the line endings in that scene and how they are twisted echoes of each other’s words which they use to jab back at the other character.  This must then inform the playing of that scene and the playing of these characters.  These characters who are sparring incredibly effectively, who are listening incredibly intently because they’re picking up precisely on what the other is saying before then throwing it straight back at them, demonstrating they are intellectually a match for one another.  All of this is there within the language and I’m a firm believer that this then informs us about the rhythm of the action, how we create that rhythm and then when we choose to break that rhythm.  There’s no setway in which everything should be done otherwise we wouldn’t keep exploring.

PO’M:  That’s it.  It’s giving the students the tools and awareness of that rhythm, so that they can then make the choices as to when they break it and then make those moments which an audience will pick up on imperceptibly.

ER: So at this stage you’re waiting to see what the class brings as well to inform what the final production will be.

PO’M: Yes, ultimately I am hoping it will be led by the students and I facilitate that happening, so that they create the show that they want to create. I’m there to help guide them through the process of making their own work.

ER: I think before we finish up we should mention that we worked together, about six years ago at the Orange Tree Theatre, in Richmond in a play called Mary Broomein which you were my son.

PO’M:  That is absolutely true! It was just after I came back from my first ever Actors From The London Stage tour, so we met just before Mary Broome.  I was exceedingly honored to be your son.  I’ve done quite a few shows in the Orange Tree Theatre.   The space is in the round and you’re extremely close to the audience so there’s this lovely sense of everyone being part of something together, which I really enjoy.  I’m constantly saying to my students here at BADA that there will always be another character/performer in the room with you –  the audience and that’s who you have to keep playing with.

Thank you Paul.  We look forward to seeing the wonderful production the Advanced Shakespeare Class produces with you later this term.