Gareth Armstrong joined the BADA Faculty this spring. As a teenager 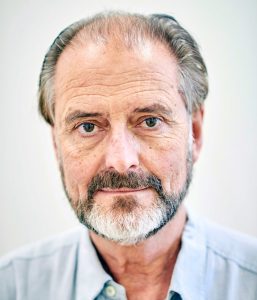 he was a member of the National Youth Theatre before studying Drama at Hull University. On graduating he worked in a number of Britain’s most distinguished regional theatres including the Bristol Old Vic and has specialised in Shakespeare. Indeed it was when he was appearing as Shylock that he wrote his first one-man show. And it’s how to write, perform and manage a one person show that he’s teaching to the students on the Year Long London Theatre Program.

Gareth Armstrong: “I was in The Merchant of Venice, playing Shylock at Salisbury Playhouse and the director Jonathan Church… said what are you doing next? I wasn’t really sure and so I said I’d thought about doing a one-man show and he said what about and I said well I’ve just been playing Shylock, what about Shylock?  And he said, “Well I’ve got a date in the studio, September 9th… there are you you’ve got a booking.” I mean there’s no arguing with that so I had to do it.  I had to write it, I had to find a director and the process was fascinating,”

Christopher Cook: The show was a huge success and you wrote about your time doing it and then you decided that you’d share the lessons that you learnt in ‘So You Want To Do A Solo Show‘ 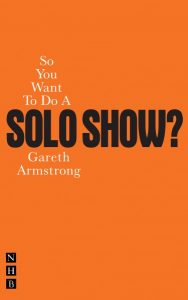 GA: “I pitched it to a publisher called Nick Hern, who does a series of books called So You Want To ….. There was nothing like it published in England, but there were several American ones which I’d got from Amazon but they were quite different, they were very much about people ‘finding themselves’ through sole performing.  They were very introspective and I was instructed that mine had to be the bones and the flesh and the skin and the blood of putting on a one man show so it had to deal with everything from the initial idea, right through to taking bookings, health and safety, the whole gamut of what you might encounter as a professional putting on a solo show.”

CC If you think of the phrase, one-man, one-person, one-woman show, it’s a relatively simple one.  But then you realise it’s an extraordinary umbrella under which all sorts of things have sheltered son what did you decide what a one-person show was?

GA: “This is an enormous umbrella as you say, so I drew on my own experience and the other one-person shows I’d seen. I looked at what had inspired them and I interviewed performers for the book. I divided it into the different types of solo pieces you can do, then analysed each of them, did a case study as it were – Miriam Margolyes doing Dicken’s Women, as an example and then someone else who did a solo show for children and a nice lady who did one about ladies knickers, all with different target audiences.  Then there was the practical side about it. Do you want to have one-man show for the rest of your life? Do you want to do it just to prove you can do it?

CC: One essential thing that emerges is that the good show has to begin with a degree of personal enthusiasm.

GA: “Passion, is what it needs, passion. I had a wonderful director when I was at Olivier’s National and he did a one-man show for twenty years about the actor Macready which you wouldn’t have thought was a very popular subject, I mean who the hell is William Charles Macready? But it was hugely successful, touring around the world several times.  When I was talking to him about it he said, well whatever subject you pick on, make sure you’re passionate about it otherwise you’re just going to get bored.

CC: “Coming back to the book, did this follow a pattern you had planned at the beginning?

GA: Well the first draft came back tarred and feathered from Nick Hern! And it was quite hurtful because he’d said. “You know, there’s a lot of actor chat here but what about the nitty gritty?”  And first of all, I thought, “Well I won’t bother, I’ll let someone else do it.” And then I thought, “No, no, you’ve got to take this on and I’m not going to give up my actor’s voice.  So, I wrote back to Nick “You know more about the theatre than me, than I’ve ever known, and you’re a wonderful publisher but you’re not an actor, you don’t know how actor’s like to be spoken to, so those things you think are irrelevant, actually are vital to an actor.  And sometimes they seem foolish or petty but to an actor, that’s an important thing to keep in mind.”  So we reached a compromise and I did my research on all the things I didn’t know about –  the venues, health and safety, all those things I’d sort of taken for granted as I’d toured but that a lot of people couldn’t take for granted.”

CC: “You clearly must have felt that actors are not taught, basically, bits of  everyday business they need to make their lives work.”

GA: “My generation of actors, rather thought that was somebody else’s business, let them get on with that, I’m just an artist, you know, but more and more you can’t do that.  You have to get down and dirty and I think actually younger actors appreciate that much more, they’re more entrepreneurial than we were.  They don’t just sit and wait for the phone to ring. they get on with it, which is what one admires about them.”

CC: “I suspect that the most difficult thing in a book like this, is finding the right voice and tone. How easy was it to find the tone that for me marks out this book “the friend at your shoulder”?

GA: “I’ve spent my entire working life with actors and as you say we don’t want to patronised, we don’t want to be bullied, we don’t want to be taken for granted so finding that was quite important for me. The actors who read the book who I know, have appreciated that you’re not teaching your granny to suck eggs.  On the other hand, why would I need to know about how to hire a van and what cubic capacity it should be and to remember to fill it up with petrol before leaving and make sure I’ve got the GPS?  Then making sure that I strike a good relationship with the stage management and the man who’s going to twiddle the knobs … It’s terribly important you don’t make enemies on the way, so you learn diplomacy. There, that’s another skill you have to learn as a solo performer.”