MEASURE FOR MEASURE AT THE RSC, MASTERCLASSES WITH ANTONY BYRNE & AMANDA HARRIS

MEASURE FOR MEASURE AT THE RSC, MASTERCLASSES WITH ANTONY BYRNE & AMANDA HARRIS

Last Saturday, our MIO participants went to Stratford-upon- Avon to watch ‘Measure for Measure’, directed by Gregory Doran, in the Royal Shakespeare Theatre. Our participants also had a chance to explore the town, and see the places where Shakespeare was born and lived.

On Sunday, we were joined by Antony Byrne for a Q&A about the 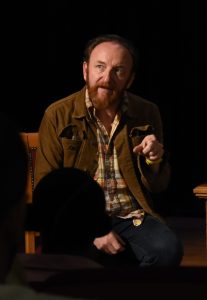 “Having seen Antony Byne’s performance as the Duke in the Royal Shakespeare Company’s production of Measure for Measure (which was fantabulously amazing), we had the wonderful opportunity to have a sit-down Q&A with him! Thank you Antony for sharing such enriching nuggets from your experiences as an actor and creative. We are so grateful to add your knowledge to our creative toolboxes as we embark on our own journeys and acting careers.”

Measure for Measure also features RSC Associate artist, Amanda Harris in the role of Provost. Amanda visited Magdalen college earlier in the program, to run a workshop with our MIO participants, working on sonnets.

A big thank-you to both Amanda, and Antony for joining us this summer!